This Monday starts the preparation of Trial against Werken Daniel Melinao, Chile 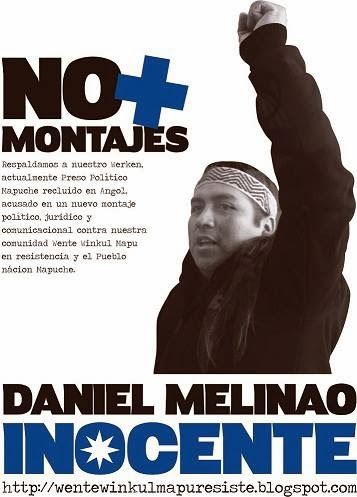 The Community Wente Winkul Mapu from Lof Chekenko declares to the local and international community that:

Kiñe: We express our full support to the Werken Daniel Melinao, who is the traditional authority of our community, and support his role as a leading social activist of our Mapuche Nation.

Epu: This coming Monday, September 30, starts the oral pre-trial hearing against our Peñi, so now we extend the call to all those who sympathize with our struggle to support the innocence of our Werken DANIEL MELINAO by comming to the court in Collipulli from 9:00 am. and protest against this politically orchestrated setup by the Ministry of Interior against a Mapuche leader. At that hearing the false and manipulated evidence of the prosecution is to be presented, with which it is intended to frame our Werken. We invite everyone to join this campaign to demand the release of Daniel Melinao.

Kila: In defense of Daniel will be presented the evidence and arguments that support and prove his innocence at trial, thereby revealing the setup that has been constructed and deployed by the prosecution in conjunction with police intelligence and national and the intelligence agencies involved in dismantling and crushing the Mapuche national movement, using methods typical of the dictatorship, as well as new methods learned and already implemented in full democracy.

Meli: Finally, we note that our Community finds itself currently legitimately exercising our right to recover our ancestral territory productively in the zone of Chiwaiwe, daily exercising territorial control in it, and not forgetting also the lands usurped by the forestry and the settler Juan de Dios Fuentes, territory that has been the scene of grossest political- judicial-communicational setups, which repeatedly have been laid bare after the Supreme Court has recognized the invalidity of the trials being declared setups.


FREEDOM TO WERKEN DANIEL MELINAO AND ALL MAPUCHE POLITICAL PRISONERS LAND AND SELF-DETERMINATION NOWMARRICHIWEU!!!!
Posted by Maricheweu International at 6:11 AM No comments: Links to this post