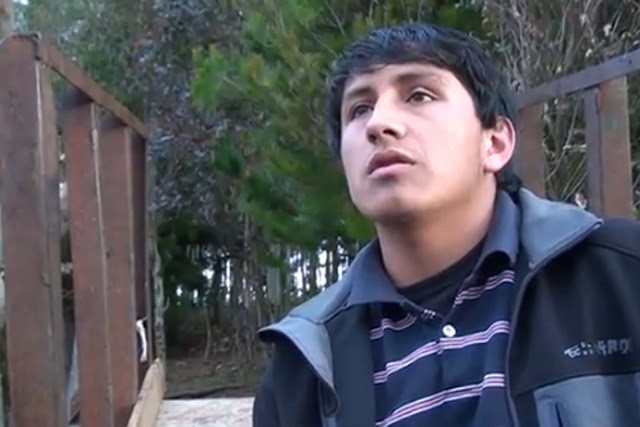 We inform the Mapuche nation and the national and international public opinion, that once again our peñi Luis Marileo Cariqueo, has been the victim of the persecution that the Chilean State has maintained against him as a consequence of the territorial recovery process that his Community Cacique José Guiñon has led for years.

Luis Marileo Cariqueo young Mapuche political prisoner in custody for 11 months in the prison of Angol, wrongly accused of a crime he did not commit, today, Tuesday July 30, 2013 at 7.00 am. Has been transferred to the city of Temuco, heavily guarded, shackled hand and foot for over 8 hours to the DIPOLCAR offices of the Chilean militarized police. This surprising move is highly irregular, as there was no prior notice to his lawyer and neither did it obey to a court order.

This irregular situation, that obeys the interests and whims of the Anti- Mapuche Prosecutor Luis Chamorro, sought to obtain his footprints and body impressions in general, brazenly offering new shoes in exchange for the shoes he wore, to continue inventing their crass setups, this time wanting to involve our peñi in an arson attack which occurred several months ago.

Luis Marileo Cariqueo flatly states that he will never allow any agency of the Chilean State and its cops to take fingerprints or some body examination, knowing well that the Mapuche people have been harassed and criminalized for years by corrupt and improper judicial proceedings, as the Chilean Justice obeys its bosses of the multinationals and large landowners. Luis Marileo Cariqueo FROM THE PRISON OF ANGOL

FREEDOM TO ALL MAPUCHE POLITICAL PRISONERS MARICHIWEW
Posted by Maricheweu International at 6:46 AM No comments: Links to this post

Statement by the UN Special Rapporteur on the promotion and protection of human rights and fundamental freedoms while countering terrorism, Chile 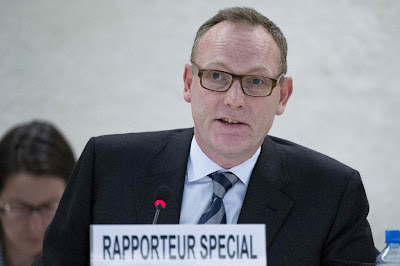 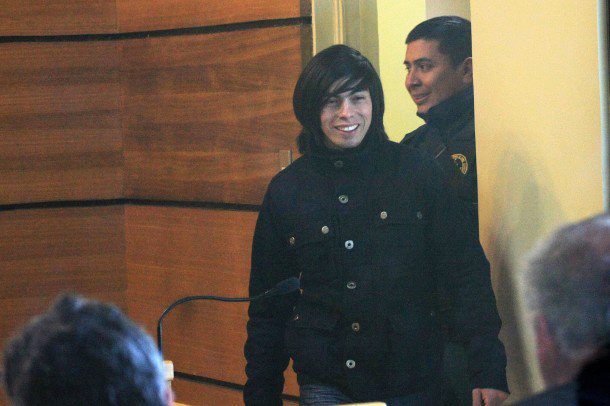 I, Leonardo Quijón Pereira, Community Chequenco, wish to communicate to the National and International Community the following:

1. That I am already 11 months unfairly in pretrial detention in the cause of the death of the settler Gallardo and I want to emphasize that I am innocent. Together with me are also accused Luis Marileo and Gabriel Valenzuela. 2. That on Monday July 29th will be held the opening of the oral proceedings at 13:00 Hrs in Collipulli, in which will be announced when the oral trial begins.

3. That I am still being harassed, persecuted and accused by the Prosecutor Luis Chamorro, who never tires of inventing crimes that I have not commited. On August 29 I will once again face a Hearing, at 10:00 am in Collipulli where I will be charged with arson.

4. I would also like to thank the support given to me by the national and international community in these months in prison.

Freedom for all Mapuche political prisoners!
Posted by Maricheweu International at 12:59 AM No comments: Links to this post 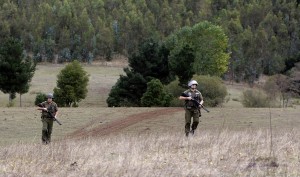 On Thursday more than a dozen police vehicles loaded with troops of the Gope Special Forces attacked and the community Rayen Mapu Lof of Lolokos (Ercilla), in search of a Mapuche recently convicted by Chilean justice. As reported by the Werken Hugo Melinao there were at least 8 trucks and about 4 armored vehicles called "skunks" that surrounded the community in search of Rodrigo Melinao, who did not appear at the hearing where he was sentenced to more than five years in prison for alleged "damage" to the forestry company Cautín.

Since then, the young community member resists in clandestinity and according to what was said by the leaders of Rayen Mapu, he will not be handed over and he will be protected by his people "because the trial demonstrated that the interests of the forestries stand above the rights of Mapuche " said leaders. Rodrigo Melinao and Cristián Levinao were sentenced on Wednesday for facts recorded in 2011 in the sector Chiguaihue in Ercilla, where there were recorded acts of resistance against forestry encroachment. At the trial, 19 witnesses testified two of them "faceless" and without identity and 4 others individualized with only their initials, as alleged measure of protection, according to the prosecution.
Posted by Maricheweu International at 10:09 PM No comments: Links to this post 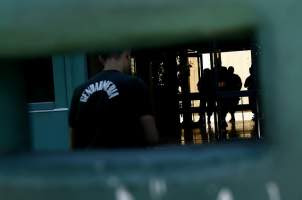 Two members of the community of Rayen Mapu Lof Lolokos, were sentenced to five years and one day for the crime of "forest arson", and 541 days for "damages to two buses and a truck tank", for events recorded in 2011 in the sector Chiguaihue in Ercilla.

The sentence delivered by the Oral Criminal Court of Angol was against the community members Christian Pablo Levinao Melinao and Rodrigo Eliecer Melinao Licán. Both also must pay a fine of four UTM.

The sentence delivered by the Oral Criminal Court of Angol was against the community members Christian Pablo Levinao Melinao and Rodrigo Eliecer Licán Melinao. Both also must pay a fine of four UTM (monthly tax unit). According to police records, the incident occurred on October 28, 2011 around 08:20 pm when Forestry Cautín workers entered to work in the middle of a forestry job, they would have met people who had entered the estate for alleged sabotage.

19 witnesses testified at the trial, two of them "faceless" and without identity and 4 others individualized with only their initials, as alleged measure of protection according to the prosecution. For neither Mapuche community member exists the possibility of obtaining any prison benefits, since they have previous convictions. Meanwhile, Levinao Melinao has two cases pending for the crime of arson, as reported from the scene to Radio Bio Bio.
Posted by Maricheweu International at 6:32 AM No comments: Links to this post

Prosecutor requests up to 30 years in prison for 3 young Mapuche Political Prisoners from Ercilla, Chile 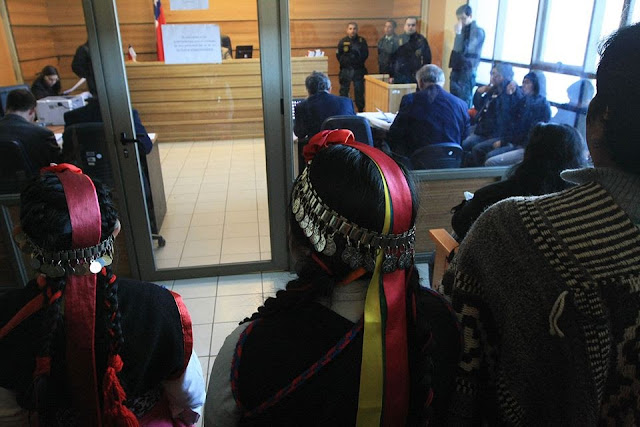 This Wednesday in Collipulli the preparation of the trial for the homicide of settler Aillapán Gallardo was begun, where the Prosecutor accuses Luis Marileo of the community Cacique José Guiñón, Gabriel Valenzuela of the community Wente Winkul Mapu and Leonardo Quijón of the community of Chequenco as authors.

Mapuche leaders and the defense have the antecedents that show that all this happens to be a new setup made against communities that historically have carried out worthy territorial recovery processes. The communities also repudiate the number of years in prison that the prosecution of Collipulli and the Chilean state is asking for: 25 years for Luis Marileo; 30 for Leonardo Quijón and 10 for Gabriel Valenzuela.

"This shows that this government day after day dedicates itself to criminalize our communities struggle to rebuild our People", said the communities.

Posted by Maricheweu International at 12:37 AM No comments: Links to this post