4th Public Statement from the Mapuche Political Prisoners on Hunger Strike in the prison of Angol, Chile 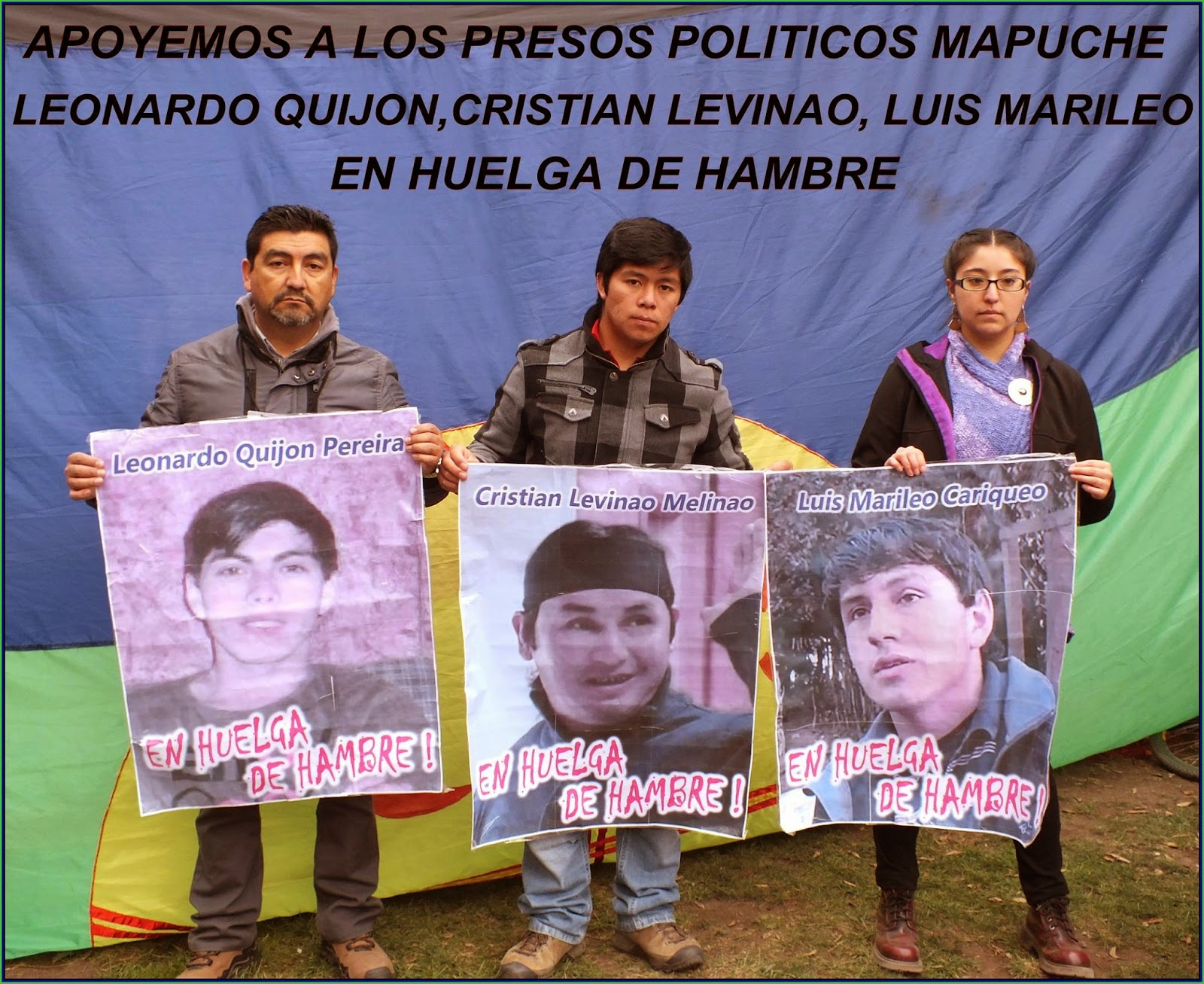 The Mapuche Political Prisoners on hunger strike in prison in Angol, make it known to the local, national and international public opinion that:

Kiñe: We stress again that our strike will firmly continue to the end and so far there is no will of the government to want to resolve our petitions.

Epu: Last night around 02:00 am, we had a decompensation in our health status, we had to be taken to the hospital in Angol by the gendarmerie of this prison, Leonardo Quijón and Cristian Levinao, suffering headaches, dizziness, chest pain, leg cramp, becoming sometimes totally unresponsive due to this decompensation, moments later our peñi Jose Mariano Llanca Tori was also taken to the hospital due to complications of his illness, this time for calcification of the vesicle. Reminding you that up to this point we are 19 days on hunger strike.

Küla: Due to the indolence of this government, we as Mapuche political prisoners on hunger strike call on you to demonstrate, by either tomorrow going to the mass visit  from 10:00 hours onwards in the prison of Angol or Tuesday 29 April to the marches to be held in Santiago, Concepción and Temuco.

Meli: Tell this Government to take responsibility for our petition, as it was they who condemned us with their persecution, criminalization, harassment while using protected witnesses and adhering to the setups created by the prosecution, particularly by the anti-Mapuche prosecutor Luis Chamorro Días, violating the right to a fair defense and surpassing their own internationally made agreements.

Kechu: Leave freedom of action for the communities in resistance and the social  movements sympathetic to our cause, performing any action in support of our hunger strike.

Freedom for the Mapuche political prisoners!!!

Demilitarization of our territory!!

Marrichiwew!!!
Posted by Maricheweu International at 7:08 AM No comments: Links to this post 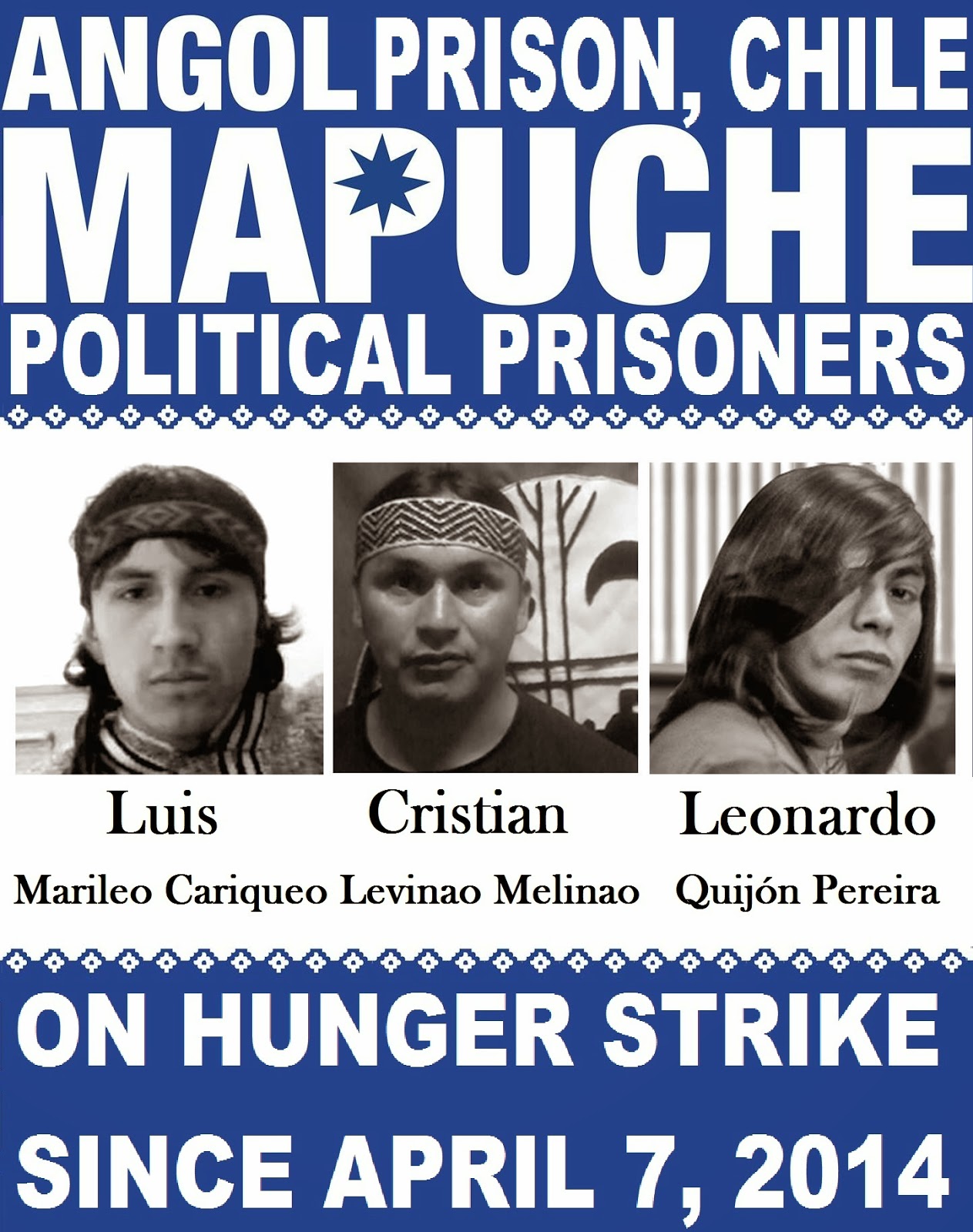 To the Mapuche Nation; Lof and Communities in Resistance and the national and international public opinion:

Kiñe: On Monday April 21, fulfilling 15 days of action, we, the political prisoners on hunger strike in the prison of Angol, have been visited by the Regional Governor Don Francisco Huenchumilla, accompanied by the Seremi of Justice and the regional director of the Gendarmerie.

Epu: We value the visit of the highest political authority of the Chilean state in the region, because this act recognizes us as political prisoners of the Chilean state and therefore reaffirms that the prosecution and convictions that affect us, are nothing but the result of setups against us, who are fighting for our legitimate demands for territory and autonomy, using the intelligence services and the prosecution as instruments.

Küla: The meeting with Mr. Huenchumilla served to clarify the points of the petition and to hear the position of the state representative regarding the solution for the strike. We hope for an early confirmation of a meeting of our spokespeople with the minister of justice to arrive at an early solution to our just demands.

Meli: We reaffirm our decision to maintain the hunger strike until an actual solution to our demands is presented, our peñi Mariano Llanca adds that, despite his poor health, he will join this action if there is no positive and quick response from the state.

Kechu: We call on the Communities and Lof in Resistance in Wallmapu, and on the organizations that support and sympathize with our just cause, to be alert to the development of the negotiations now in progress, we will not fall for the delaying tactics to try to break our strike. We also make a call to take actions that make visible and give support to our petition.


An end to the secret witnesses in trials against Mapuche!
Freedom for the Mapuche political prisoners!
For the rebuilding of our Mapuche Nation!
MARRICHIWEW


Posted by Maricheweu International at 12:32 AM No comments: Links to this post

We, the Mapuche political prisoners in Angol prison, who are currently on hunger strike, declare the following:

1._ We reaffirm our position of being on hunger strike, affirming our decision to go on till the end or until our demands are resolved by the government.

2._ Up to this day Wednesday, April 16th, we have had a significant drop in weight from when we started our action on April 7th as we now inform you:

3._ We call on all communities and social organizations that have consciously been supporting our movement to respect the structure of work we have as Mapuche political prisoners alongside our spokespersons, also leaving freedom of action to the  communities in resistance and social organizations to take action as they see fit to support our action, but respecting the work of our spokespersons.

FREEDOM FOR THE MAPUCHE POLITICAL PRISONERS.

DEMILITARISATION OF OUR TERRITORY.

MARRICHIWEW ...
Posted by Maricheweu International at 1:00 PM No comments: Links to this post 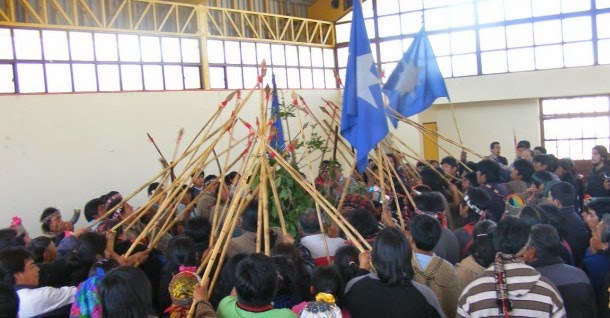 Angol Prison, to the local, national and international public opinion, we present the following:

As Mapuche Political Prisoners we will begin a hunger strike starting this Monday April 7, 2014 and of an indefinite character, demanding the following:

Kiñe- Demanding the revision of the sentence regarding Luis Humberto Marileo Cariqueo, Cristian Pablo Levinao Melinao, Leonardo Quijón Pereira while at the same time questioning the use of protected and anonymous witnesses, in each of the sentences carried out, with the anti-Mapuche Prosecutor Luis Chamorro Diaz, because in that process we had no access to a fair defense, as all arguments considered by the judges were based on setups and the use of faceless witnesses by the public prosecutor.

Epu- Demanding immediate transfer to the center of education and work (CET) of Angol, since this request was agreed and signed in at least three previous strikes, also taking into account the various international treaties signed by the Chilean state, as is the ILO Convention 169, also for our culture, attachment to mother earth and our community and our family.

Küla- Demanding humanitarian pardon regarding our peñi Jose Mariano Llanca Tori, because our peñi suffers a disease of terminal character as was confirmed by a private physician and the doctor of the prison itself, given the short life expectancy of our peñi, who therefore also takes part in our strike.

Meli- We call on the communities in resistance to have no links of negotiation with the incumbent government while our request as Mapuche Political Prisoners on hunger strike are not resolved and as was agreed with all Lof in resistance to support this mobilization, from Malleco, Cautin and Arauco. An agreement reached on April 5 in a Nguillaumawun in Angol prison.

Kechu- Demand of the government of the day, especially of the regional government, that its asking of  forgiveness from the Mapuche People, comes with actions and not just words and to no longer criminalize our Mapuche Nation.

NO MORE SECRET AND ANONYMOUS WITNESSES
DEMILITARIZATION OF THE MAPUCHE TERRITORY
NO MORE PERSECUTION AND CRIMINALIZATION OF OUR PEÑI
FREEDOM FOR OUR MAPUCHE POLITICAL PRISONERS
NO MORE MURDERS IN OUR COMMUNITIES
RETURN OF ANCESTRAL TERRITORY
Posted by Maricheweu International at 12:39 AM 2 comments: Links to this post