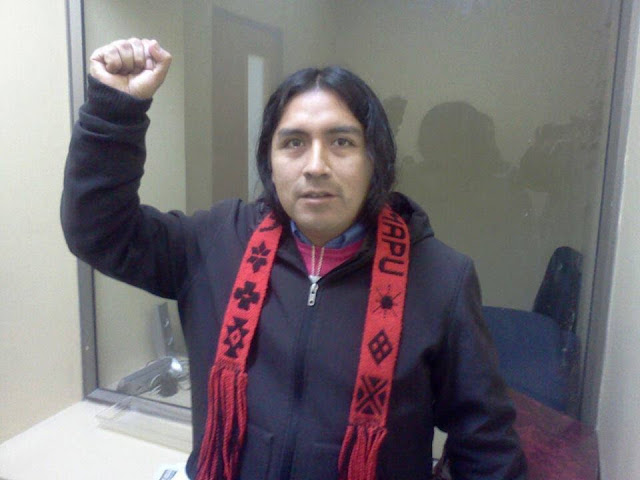 The Community Wente Winkul Mapu of the Lof Chekenko, states the following to the Mapuche Nation and the general public:

Kiñe: We strongly support our Werkén Daniel Melinao, Mapuche Political Prisoner currently confined in Angol, facing the preparation for trial that will be held on September 12, accused in the setup directed by the prosecutor Chamorro and orchestrated from the public ministry, because he is not only a leader in our community but he is also a traditional authority in our territory and of the Mapuche Nation.

Epu: Our Werkén is accused of being the co-author of the death of Sergeant Albornoz. In his trial over thirty witnesses will declare in favor of the prosecution,  25 of whom are policemen, 3 doctors working in forensic work with the police and 10 police officers of the Investigations Department, which certainly shows clearly the intention to prosecute and condemn our brother and collusion from the repressive institutions of the state, because despite having more than 15 months to make tests, they still fail to implicate the involvement of Daniel in the case, which confirms his innocence, let alone rule out the possibility that Albornoz's own colleagues in a violent frenzy have mortally wounded him. We are certain that among the police witnesses who will present testimony for the prosecution is the author of the deadly shooting that claimed the life of an official who was repressing Mapuche communities and still going unnoticed.

Kila: We are concerned about the racism and stubbornness with which the anti-Mapuche prosecutor Chamorro acts, since at all costs he wants to keep Mapuche social activists imprisoned. In the case of our Werkén, he asks the court for a sentence of 20 years for presumably facilitating the death of Albornoz, 10 years for attempted murder of a captain who was supposedly hit by with buckshot in a mild form, and one year for obstruction of the work of police, seeking a sentence of 31 years in prison, and makes it clear how biased this historic judicial process is, as more than a civil trial looks like a military war tribunal.

Meli: We extend the call to not lose sight of this important trial, as it is a significant precedent for the Mapuche Nation, because our community was more than willing to clarify the facts and allow the expert works, however, the strategy of the State does not lose opportunities to create the impression that the violence comes from the Mapuche and hides its illegal State terrorism. Solidarity is important to generate more and better bonds in the struggle of our People. Kechu: Let us accompany the Peñi of Rayen Mapu and Cristian Levinao on Monday August 19 at the hearing to be held in Angol.